The gig economy: How is it changing the UK labour market? Since the financial crash of 2008, people have sought new opportunities to make money. Increased competition for work has compelled people to come up with new and interesting ways of earning, leading to a complete revolution of the working world as we know it.  Zero hours contracts, the sharing economy and, most recently, the gig economy are now prominent features of our everyday lives. These concepts are by no means new; however, they are attracting attention in the modern day employment landscape.

The dream of being self-employed is an aspiration for many. The flexibility of being your own boss and working hours to suit your lifestyle, of course, seems very appealing. But has the rise of freelance opportunities caused more headaches than happiness?

The reality is that the UK has never seen so many people working on a self-employed basis. Organisations like Uber and Deliveroo represent just a fraction of the market that has enabled many people to work more freely.

However, increased litigation against businesses offering people occupational independence has brought into question the suitability of these self-employed opportunities. Court cases against Uber and other similar enterprises are setting new precedents in terms of employment rights for individuals, but what does this mean for the UK economy and business owners across the country?

We examined the meaning of the “gig economy” and the impact it could have on businesses across the UK.

What is the gig economy?

The gig economy refers to freelance work commissioned on a short-term basis, as opposed to permanent contracted employment. Workers get paid for each ‘gig’ they complete, whether it’s food drop-offs, parcel delivery or giving someone a ride.

Many of these businesses are harnessing smartphone technology and the power of social media to provide services of convenience and ease.

What are the downsides of the gig economy?

There has been much controversy over this employment trend, with a handful of organisations facing legal action surrounding the employment rights of gig economy workers. Similarly, experts have stated that some organisations are avoiding paying minimum wage, denying pensions and rejecting holiday rights.

Questions have also surfaced surrounding the classification of certain app-based businesses, and court cases are setting new precedents in employment law that could alter the shape of the UK’s labour market.

How is the gig economy changing the labour market?

Uber, a key player in the gig economy, has faced numerous court battles and employment tribunals in the UK. Having lost an appeal against a ruling that its drivers should be classed as employees, the rights of workers in this evolving landscape are certainly taking shape.

Uber argued that it was not part of the gig economy, and the decision could deprive drivers of the “personal flexibility they value.” The court deemed that drivers should be entitled to minimum wage as well as sickness and holiday pay; however, it plans to appeal to the UK’s Supreme Court.

This news came soon after a decision was made by Transport for London not to renew its private hire operator licence after 30th September 2017.

How will the gig economy affect UK business?

According to the Office of National Statistics, the number of self-employed people in the UK has risen by 45% since 2001. In 2017, more than 15% of the UK labour force were classed as self-employed.

However, if we look deeper into ONS data, the impact of the gig economy becomes much clearer. Since 2010, there has been a 25% increase in non-employer businesses within the UK’s private sector. This is a greater and faster rate of employment growth than other private sector SMEs. 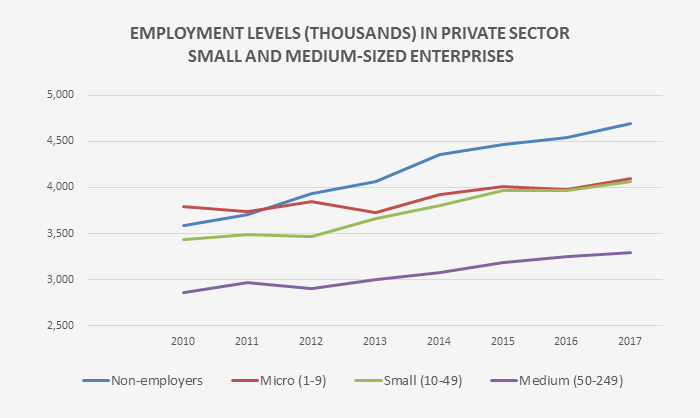 When we drill down into individual sectors and cities, the impact of the gig-economy becomes even more pronounced. London, for example, has continued to see strong growth in the number of businesses across all industries and sizes, but non-employer businesses, in particular, have seen the largest growth since 2010 (a 49% increase).

When one considers the sectors where gig jobs are most prevalent, the impact becomes self-evident, particularly in London. For instance, London based “transportation or storage” businesses, which relies heavily on the gig economy; saw a significant decline in employment between 2013 and 2015, when, in contrast, there has been an explosive growth in the number of registered businesses that are classified as non-employers.

Experts have speculated that employment law should be updated to handle the changes and development in the structure of the UK labour market.

In 2017, the government released the Taylor Review of Modern Working Practices; an independent report that looked at the changing labour landscape.

What does the Taylor Review recommend?

The Taylor Review sets out a few key recommendations to ensure a balance between workers’ rights and those that are self-employed. In essence, the Taylor Review states that basic principles should apply to all forms of employment, including taxation.

In addition, the paper recognises that technology presents new opportunities; however, fairness needs to be ensured for those working through these platforms as well as their competitors.

A clearer distinction is needed to define “workers” and the “self-employed.” Firms should support people in the decision-making process so that individuals can know and exercise their rights, providing protections and stronger incentives for firms to treat ‘dependent contractors’ fairly.

Good management and strong employee relations are essential within any organisation, and future work prospects must be realistically attainable.

Finally, the Taylor Review recommends sectoral strategies to ensure people do not face insecurity and are not stuck at the living wage minimum. It also highlights a need for people to progress in their current and future work.

These suggestions seem logical and reasonable, but the practicality of implementing these changes could take years. In the meantime. new technologies and ways of working could emerge, calling for further reform and changes to the rights of workers and employers alike.

Ignore training for all ‘at your peril’ Managers believe a gap year is as good as a degree

Right to train gained by 25m